The churches in Mexico are an attractive place to paint or sketch – usually safe, good sitting areas and architecturally interesting.

Here in Puerto Escondido, my first discovery was the unfinished church and “cathedral to be” on my walk to Playa Carrizalillo. I decided to do a watercolour sketch of this massive concrete form which took over a whole city block. The gentleman at the corner store offered me a table and chair, he then lowered the awning to give me shade, I ordered a cool drink and so began a serene afternoon.

Where do the people worship here if this church is not in working order? This takes me to the church overlooking the bay at Playa Principal, Neustra Señora de La Solidad. 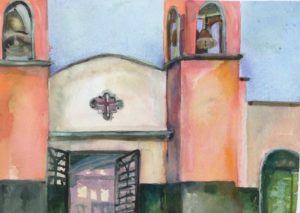 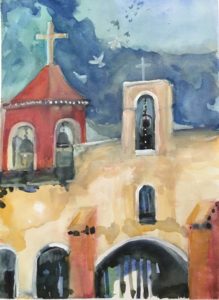 My recent sketching of church façade has introduced me to John Piper (1903-1992) a British painter, printmaker, stain glass window designer. opera and theatre set designer and writer. During the Second World War he was a British official war artist. He was fascinated by the destruction of bombed out churches in Britain. Often at the scene at daylight, he was able to capture both the beauty and devastation. His work has influenced my thoughts on drawing churches. I hope to emulate his strong lines and spaces but still keep my intuitive curiosity.