One of my professors at college would say, feed the the mind like a humming bird drop by drop. At the time, I thought it was silly.

The May 13, 2014 Canadian Art Auction catalogue at IEGOR has a painting of Claude Le Sauteur, Un instant de souvenir. In the Québec village of Les Éboulements people speak often the name Claude Le Sauteur ( 1926-2007).There is no answer why I am not familiar with his art work. Certainly, a missed opportunity.

A fan of his paintings at pinterest  present her favourites.

My favourites are here.

I admire the simplicity of colour and space. However, it is not where my hand and mind is now. So no misgiving on my part, just need to keep looking and painting. 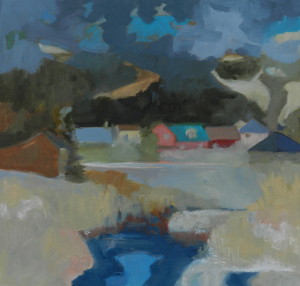