The image of Bill Reid‘s (1920-1998)  Spirit of Haidi Gwaii  was on the Canadian 20 dollar bill from 2004-2012. So, when I visited the Canadian Museum of History in Gatineau this past week I took the opportunity to sketch the original white plaster cast that stands in the Grand Hall. There are only two bronze versions of this sculpture in existence. The Black Canoe installed at the Canadian Embassy in Washington, D.C. and the second and final casting, The Jade Canoe at Vancouver International Airport. 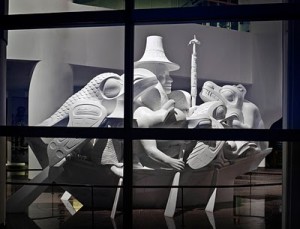 You need to pay to sketch from the inside but the grounds outside are free. It is a great view with the Parliament buildings, the distance dome of the NAG, the Ottawa River and on the Québec side remnants of a stonemasonry building from previous times. As someone suggested, Ottawa should put up a big mirror on this side of the river and they would have this wonderful view. The museum buildings are by architect Douglas Cardinal. If you have only a short time to visit this site the many outdoor sculptures and gardens are well worth it.

The book, The Black Canoe, Bill Reid and the Spirit of Haida Gwai with photographs by Ulli Steltzer and text by Robert Bringhurst enhances our appreciation of the dedication and perserverance of all people who helped artist Bill Reid to complete this sculpture. Diagnosed with Parkinson’s disease in 1970, it must have been a tremendous effort for him but he quote’s it “gave him a purpose and drive“.

Here are my pencil sketches done in my Venezia sketchbook. The Mouse Woman tucked under Raven’s tail and the Chief directing his loaded boat 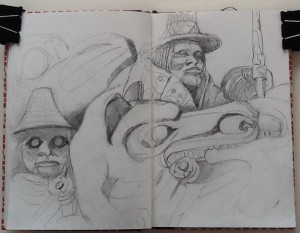