I love this sculpture of Barry Flanagan (1941-2009). He does not have the sophistication of  horse and cougar, found in the lobby of Montréal Museum of Fine Arts*. He is a horse with attitude: swayed back and scrawny but still looking for action. A horse able to withstand the “polar vortex”  we had this week in Montreal. You can drive or walk by this equine sculpture 7/24, no entrance fee, just there for our pleasure. * The sculpture has moved to the bronze section of MMFA.

The Kouros Horse ( bronze, 1986) is located on the corner of Stanley and Sherbrooke, 1130 Sherbrooke west. 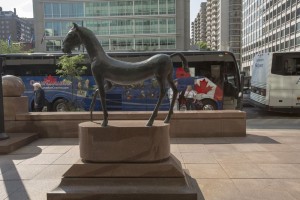 My neighbour was a Brit and horsey. She told me that Munnings, considered one of the best equestrian painters, would lie under the steeplechase jumps so he could best feel and see the action. You can crawl around this equine without danger of a kick or bite. Take a look at the monogram “f’ and number 2/6 on the left hind hoof. There are 6 editions and 2 artist casts. 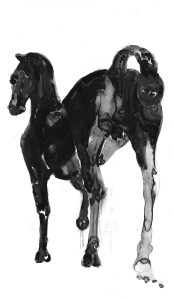 In Montréal, there are other outdoor equine sculpture to view 24 hours a day. George W. Hill (1862-1934) born in Shipton, Québec sculpted the Boer War Memorial and unveiled it in the spring of 1907. It still stands today in Dorchester Square, bordered by René Lévesque, Peel, Metcalfe. The riderless horse with a soldier restraining from the ground is unusual as most equestrian memorial are mounted. If the horse is mounted and has all four feet on the ground, it means the rider died of natural causes, if one foot is in the air, the rider died subsequent to wounds received in battle and if two feet in the air, the rider died during battle. 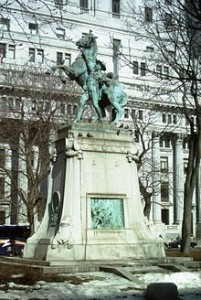 The  outdoor sculpture by  Fernando Botero, named The Volumptuous Man on Horse is located at the entrance to LHotel, 262 rue St. Jacques, Old Montreal. This rider is so privileged to be sitting on a calm horse that appears to requires no skills but good balance. Some would refer to him as a “hood ornament” similar to ones found on antique cars. It is ok to be vain when you are so beautiful. 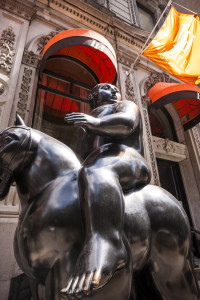