Mackenzie King (1874-1950) was Canada’s 10th and longest serving Prime Minister. He is remembered for his odd ways: consulting the crystal ball and talking to his dead mother. His head may have been in strange places but his heart was big. He bequeathed his summer home with 231 hectares in the Gatineau hills to the Canadian people. The garden elements distinguishes this place and many feel it is haunted by King. The ruins are from London’s Abbey, Ottawa’s British American Bank Note ( demolished in 1936) and other bits and pieces of bygone buildings.

My thought is he listened to elder Dan George and gave us Mackenzie King Estate.   Nothing belongs to you, of what there is, of what you take, you must share.

I sat on the porch step of his former summer home and sketched the stone lion statute attached to a flag pole. This place requires many hours to sketch and many days in different seasons. 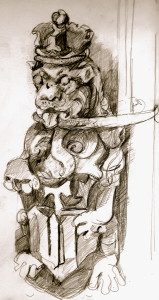 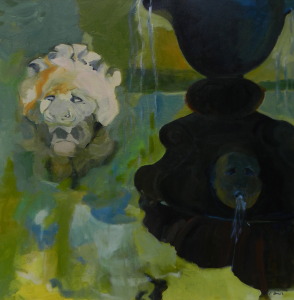 The lion symbol is strong and protective and this month he became part of a garden series I am painting.