Winter is here with days of cold winds and snow squalls. This being said, the train was a good option for a trip to Toronto to see Mystical Landscapes; Monet, van Gogh and More at the Ontario Art Gallery. Toronto is just as cold as Montreal but we decided the 20 minute walk from the train station was just what we needed. As we approached the gallery we enjoy the sweeping glass facade by Canadian born architect Frank Gehry and a huge outdoor sculpture by British Henry Moore. The gallery has over 900 sculptures and works of Henry Moore.

Mystical Landscapes has a wide selection of paintings by artists from 15 countries covering the period from 1880 to 1930. The eye catching names of Monet and van Gogh are the show stoppers.

There is a wide interpretation of mystical and spiritual landscapes in the exhibit. For example, Austrian Expressionist Egon Schiele Landscape with Ravens, 1911 is dark and raw. Juxtaposition is the French painter Maurice Denis, La solitude de Christ, 1918. Here, the bright warm colour choice for the landscape reinforces the sole figure’s passive position and offers safety to mankind outside the sanctuary of the church. At this time, Europe was experiencing the first war from 1914-1918. Maurice Denis was a Symbolist and theoretican of the Nabis movement. In the same space we look at Post Impressionist artist Paul Gauguin, Vision of the Sermon -Jacob wrestling with the Angels, 1888. The choice of colours and complex religious story made it Gauguin’s first masterpiece. Bought in 1925 for 1,150 pounds by the National Gallery of Scotland it is now one of their finest purchases – Gauguin had offered to give it to the Church of Pont-Aven but “naturally they don’t want it”. The rooms are filled with paintings of Georgia O’Keeffe, Piet Mondrian, Edward Munich, James McNeil Whistler, Paul Gaugin and many other lesser known artists.

As Christmas nears we celebrated the life of Cleo on our farm. She was a dog of unknown breed found at the SPCA over sixteen years ago. 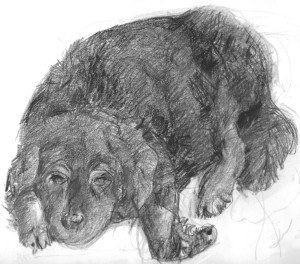 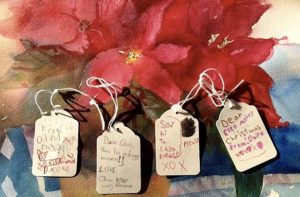 Merry Christmas and thanks for your support throughout  2016, Linda