After my week at Durtal France,  it was “a must” to spend a few days in Paris. A friend recommended the Hotel des Bains in the 14 arrondissement of Paris. It is close to the Montparnasse Train Staion, shuttle bus to airport and metro. The clean cosy rooms are small but there is everything for an average traveller; updated bathroom, flat TV screen, WiFi and a comfortable bed.

The street and immediate area has all needed amenities. There is a drugstore, small bistros with good food and wine, boutiques selling leather goods, women clothing, and a swim suit shop with Arena  – a brand not available in Quebec but so chic. Best of all, are two art shops – Dalbe and Adam Montmartre both within five minutes of the hotel specializing in a variety of watercolour paper, paints, oil and printmaking supplies. On Saturday morning there is a market for fresh produce, mostly vegetables and meats. Every Sunday there is an art market referred to as the “marché de la création”. This open air art market started in the early 1900’s when it was called “la horde de Montparnasse ” and also known as “Le Marché aux Navets” since the artists shared the same ground as the vegetable farmers. In days gone by artists such as Modigliani, Soutine and Chagall had stalls here. I adore Abstract Expressionist painter Soutine ( 1893-1943) for his paintings full of texture, colour, and shapes. He lived a frugal life and only after the Barnes Foundation bought a substantial number of paintings was he able to be financially secure. The worse was to come under the Nazi occupation of France with Soutine a registered Jew. He sought refuge and with help from friends he hid in several small provincial villages.This tremendous stress aggravated an old ulcer; he died during surgery in Paris. 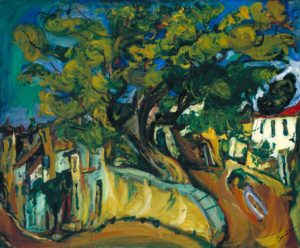 Montréal has a connection to this painter, “Soutine Settled over Bargain Meat“. A good read about the business side of art.